As thousands of protesters descended on the state Capitol on Monday in an effort to protect access to abortions in Texas, Republican state leaders launched their second special legislative session with a clear message: They will not stop until they’ve approved far tighter restrictions on the procedure. 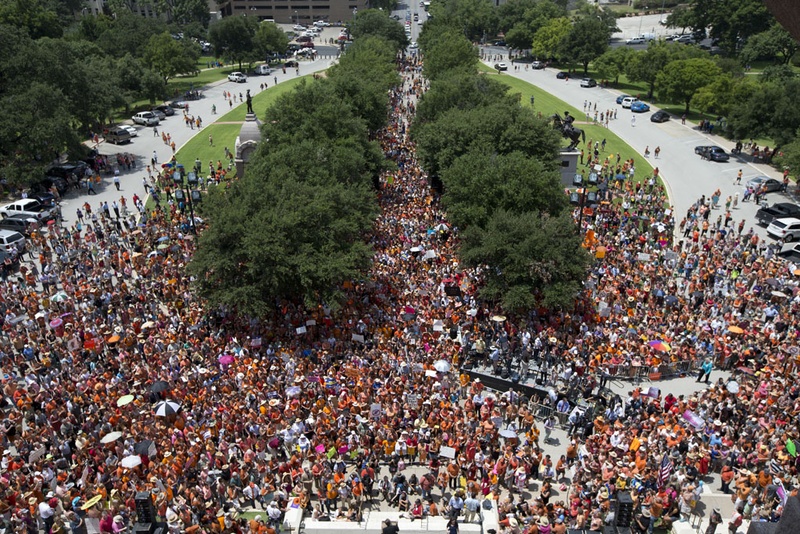 photo by: Bob Daemmrich
Activists converge at the south steps of the Texas Capitol as the second special session begins July 1, 2013.

With 30 days and the majority of state lawmakers on their side, Republicans are almost assured success this time around as they seek to pass restrictions that would ban abortions starting 20 weeks after fertilization and require clinics performing the procedure to meet costly new requirements that could put many of them out of business.

“The Texas Legislature is poised to finish its history-making work this year by passing legislation to protect the unborn and women’s health,” Gov. Rick Perry said in a statement.

In the first special session, the measure didn’t make it to the Senate for final approval until the last day, giving state Sen. Wendy Davis, D-Fort Worth, the window — and the national stage — to filibuster the measure to death.

“I was lucky enough to be able to make the choices in my life that I knew would work for me,” Davis told supporters on Monday, responding to Perry’s suggestion that, as a teenage mother herself, she should’ve “learned from her own example.”

“That’s what we are fighting for now,” Davis added. “A Texas where every woman is able to overcome her unique challenges, because she has the same choices and the same chances I did.”

The House will consider public testimony on HB 2 starting Tuesday afternoon; state Rep. Byron Cook, R-Corsicana and chairman of the House State Affairs Committee, said testimony would begin at about 3 p.m. or 4 p.m. and end promptly at midnight.

When the Senate will begin its committee work is less clear; the Health and Human Services Committee chairwoman, Sen. Jane Nelson, R-Flower Mound, was out of state on Monday attending her daughter’s graduation.

What is clear is that Republican legislators plan to make quick work of the process. Laubenberg said that when her bill hits the House floor — as early as next week — she does not plan to accept amendments from her colleagues. As of Monday afternoon, more than 400 people had already pledged to testify against her bill in committee.

“The best thing to do is keep the bill the way it is,” Laubenberg said.

The Senate, meanwhile, will proceed without the “two-thirds rule” the chamber normally uses — meaning it will only take a simple majority to bring the bill up for a vote. (The Senate also did without that provision during the first special session, which ended Tuesday.)

“If they win this battle, because of timing and throwing out tradition and rules, I think we will win the war,” said state Sen. Kirk Watson, D-Austin.

While Watson wouldn’t provide specifics on what the Democrats’ strategy will be to fight the legislation this time around, state Rep. Chris Turner, D-Arlington, said they will take it one day at a time and file measures to help reduce the number of unintended pregnancies in the state.

As lawmakers discussed the rules of decorum on the House and Senate floors, thousands of people dressed in orange rallied outside to show their opposition to the legislation. Protesters listened to speeches by Democratic lawmakers and music by Bright Light Social Hour and singer Natalie Maines of the Dixie Chicks. And they wrote messages on wire hangers to send to Perry to express their discontent with the measure.

Inside the Capitol, supporters of the abortion restrictions wore blue and formed a ring along the second and third floors of the Capitol rotunda. Some stood silently with the word “Life” written on tape covering their mouths. Others sang “Amazing Grace” repeatedly for hours.