It’s only Thursday and it’s already been a busy week.

On Monday, my colleagues chose me to serve as Chair of the House Democratic Caucus. I am honored and humbled that my fellow House Democrats have put their confidence in me.

As Caucus Chair, I look forward to working with all of my Democratic colleagues as we focus on strengthening our public schools, creating more economic opportunity for Texas families and standing up to the misguided policies coming from the Trump Administration.

The House Democratic Caucus has a lot of work to get done this legislative session, but by working together, I am confident we will protect the best interests of Texas families.

It didn’t take long before House Democrats were put to work.

On Tuesday, Governor Abbott gave his State of the State address and laid out his priorities for the legislative session.  With so many critical issues impacting our state, it was my hope that Governor Abbott would focus on those issues and largely avoid partisan rhetoric.

Unfortunately, that was not the case. In his speech, there was far too much 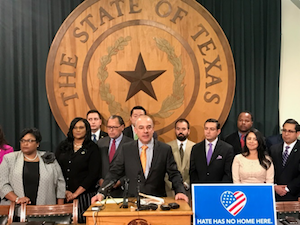 focus on right-wing red meat issues and too little on the crisis impacting CPS and foster care or the need for more public school funding. There was no mention of the 60,000 children who may lose access to their speech, occupational or physical therapy due to last session’s draconian budget cuts or the need to spend time and money on expanding mental health services across our communities and state.

Following the speech, more than 30 House Democrats and several of our Senate colleagues held a press conference to respond to the governor’s remarks. If you missed what we had to say, click here.

In reaction to the speech, I also released the following statement:

Governor Abbott’s State of the State address was one of missed opportunities and misplaced priorities. Texas Democrats have one priority – giving all Texans a fair shot at achieving the American Dream. That means investing in our schools, making college more affordable, protecting vulnerable children and making sure Texans can earn fair pay.

Governor Abbott spent his speech largely on partisan and divisive issues that will hurt, not help, the people of Texas. New barriers to women’s health care, attacks on local elected officials, telling Texans how they can and cannot spend their paycheck and denying homeowners the right to hold their insurance company accountable do nothing to move our state forward.

In contrast, House Democrats are ready to focus on our communities’ priorities and to address the real needs of our state, not focus on partisan rhetoric. We want every Texan to have a fair shot at getting a good education, finding a well-paying job and feeling safe in their community.

House Democrats have a lot of work ahead of us and we will fight day and night for our communities and the children of this state, and against the divisive hate-filled rhetoric that is plaguing our political system in Washington and here at home.