Yesterday, the Senate passed HB 449, my bill that would require a college transcript notation if a student is determined ineligible to re-enroll because of a serious code of conduct violation including sexual assault, terroristic threats, burglary or drug charges.

This bill has taken over three years to get to this point and I know we could not have done it without Senator Kirk Watson, who sponsored the bill, or the student conduct experts who were with us every step of the way. Many played critical roles in the content and the passage of this measure, but no one played a bigger role than Sierra Smith.

Last week, for the third time in two years and for the second time in as many months, Sierra shared her very personal story about her experience with sexual assault.

I urge you to watch her testimony and to share her words. Click on the video below: 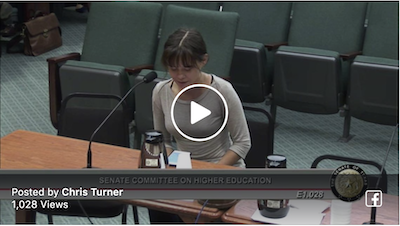 The bill is now headed to the governor’s desk.

It is my hope that he signs it into law in order to protect other young women like Sierra, who graduated from Baylor University last Saturday, from being victimized on their college campuses.