Last session, in a backroom deal made during the 11th hour of the 84th Legislative Session, a Medicaid “cost-savings” measure was tacked on to the two-year state budget.  The result — an estimated 60,000 low-income children were put in jeopardy of losing access to speech, occupational and physical therapy.

Since then, providers of these services have been fighting to keep their doors open. Last week, my staff met with an Arlington-based provider that serves 500 North Texas children covered by Medicaid.  As a result of the draconian rate cuts, in just the past few weeks, this provider has had to:

Max out their line of credit

Negotiate lower utility costs to keep the lights on

To add insult to injury for acute therapy patients and providers, the Texas Health and Human Services Commission released a new set of cuts just a couple of weeks ago, including a 30% rate reduction for therapy assistants. This would hit rural and other underserved areas of the state particularly hard because in those communities, there is a shortage of licensed therapists. As a result, therapy assistants, who hold four-year college degrees, fill the gaps. However, in order to do so, they must be supervised in some capacity by a licensed therapist, an expense that is not reimbursed by Medicaid and is paid directly by the therapy service providers. Cutting therapy assistants’ pay is a double hit for providers.

Yesterday, the Senate approved their version of the state’s budget for the next two years. How much was included to reverse these terrible cuts? Zero. Nothing. Not one dime. Of course, it was Senate Republicans who added the rate cut measure to the budget two years ago, so…

Next week, consideration of the budget moves to the House floor. I haven’t seen the final version to be presented yet (it’s being considered by the House Appropriations committee right now), but my understanding is that there will be funds to reverse some of these cuts. It is my hope that the House fully fills the hole and I will continue to strongly push for that to happen, since we have the money to do so, regardless of what some Republicans may say.

Right now, the Economic Stabilization Fund (ESF), commonly known as the “Rainy Day Fund”, is flush with cash. In fact, it’s the largest such fund in the country and if left untouched, it’s estimated that by 2019 it will reach $12 billion.

The ESF was put in place to fund critica 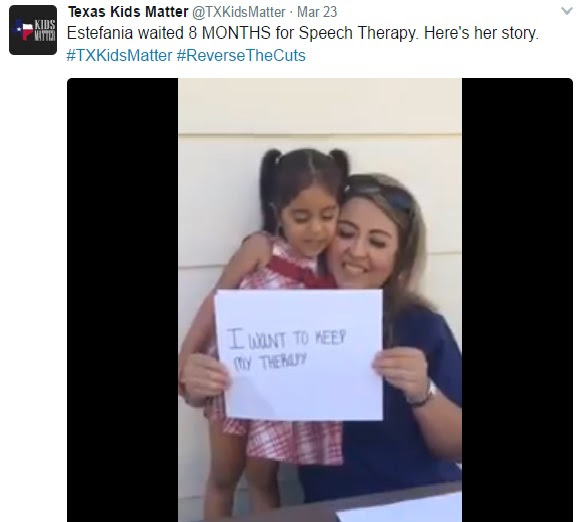 l programs in tight budget years.  Not using what would be a very small portion of the ESF to fully reverse the Medicaid therapy cuts is unfathomable.

Over the past few weeks and months, there has been a renewed push by families, providers and advocates to #ReverseTheCuts and videos featuring the children impacted by these cuts are being spread across social media. The videos are a moving reminder of what is at stake. I urge you to watch and see the faces of this issue. Click here to watch their stories.

You can help these kids.

Tomorrow, I, along with many of my House Democratic colleagues, will participate in a Thunderclap to spread attention about this issue. Thunderclap is a new concept for me, but the millennials on my staff assure me that it’s pretty effective. To make sure it is a success, we need your help.

The social media posts will go out at the same time tomorrow (Thursday the 30th), so please sign up now!

Thousands of kids across Texas need our help.